Humanisation is innovation
and represents a legacy and resilience

The agricultural sector has reasons to celebrate in the Canary Islands. 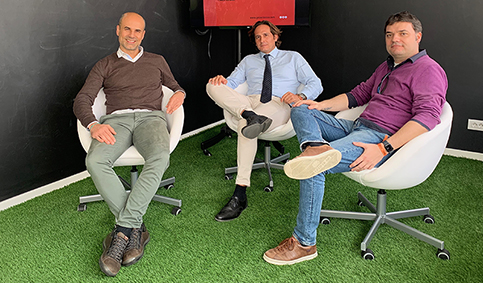 Leopoldo Cólogan, who was selected by other lawyers to be included in the 2020 edition of prestigious international directory The Best Lawyers in Spain, alongside Pablo Marrero and Gustavo García, co-founders and organisers of Géiser, whose innovation forum has backed Leopoldo Cólogan | Law Hotel for the third year in a row.

Philosophy, psychology and anthropology, along with engineering and mathematics, are flourishing. These and other topics were brought forward at the excellent forum of responsible innovation, creativity and business, Géiser 2019, which was held at the Auditorio de Tenerife on 7 November 2019, with speakers representing different approaches to leadership from Endesa, Innuba, Cabify, Facebook, La Bolsa Social and MIT Technology Review.

Innovation, sustainability and resilience are three concepts with a great deal of content: the people at the centre, satisfying the interest and the needs of employees, providers, clients and partners, in that order; action against climate change and with regard to social purpose and the legacy to be achieved; and the ability to rise up and understand the past, starting on the premise that mistakes are a great learning experience and that things can turn out badly even if you have done everything right. All of this facilitates innovation, success and the creation of a legacy marked by social responsibility.

The world is changing and becoming more digital, hierarchies are levelling out and the need to collaborate intelligently is emerging, with everyone contributing to something they are good at and are passionate about, which is known as smart collaboration. Furthermore, the concept of cross-selling is being rejected because it is centred around the person and not the business, which paradoxically leads to more business and happier people, as we were reminded by Heidi K. Gardner, a professor from Harvard Law School, at the innovative VI Legal Management Forum 2019 held in Madrid on 10 October 2019.

Technology is not good or bad, it is people who are good or bad, as was pointed out at Géiser 2019. The same can be observed in the exercising of rights, which depend on people, and the rights of a person end where those of others begin.

Innovation and digitalisation provide access to information. However, this is limited, as shown by a recent judgement of the Criminal Court No. 2 of Huelva, number 290/2019 of 11 November, which establishes a conviction for an offence under intellectual property legislation, consisting of creating cinema websites that provide interested Internet users with direct access links to films without restrictions, of which the rights are protected by legislation on intellectual property. The films are stored and downloadable for them to watch, without the authorisation of the legitimate owners of such works.

This is because it does not provide access to a work already published by the rights holders, but rather it modifies and lifts the restrictions and publicly transmits content to a “new audience” without authorisation, recalling that previously established in the Supreme Court judgement 638/2015 of 27 October.

In the same way, the development of the Internet and information and communication technologies, as well as the expansion and intensive use of mobile and Internet devices, social networks and services, such as instant messaging or geolocalisation, have brought about changes in the ways that people interact with one another and thus changes in the understanding of professional activity, businesses and competitiveness.

These new forms of interaction call for the responsible use of new technologies, and particularly the need to be conscious – at home, at work and in schools – of the fact that the right to use this technology is limited, and that conduct constituting harassment based on unlawful processing of personal data is not admissible. This includes the recording or dissemination of degrading images that do not respect the privacy of people, as well as the publication or dissemination of messages or audiovisual content (images, memes, etc.) that aim to degrade a person and create an environment of humiliation or hostility, derogatory comments, offensive jokes or discrediting the professional skills of a person in instant messaging networks or social networks, whether sexual in nature (constituting sexual harassment), related to the gender of the person (harassment due to gender) or their sexual orientation or identity, general in nature (workplace harassment), insults or false rumours using instant messaging and social networks.

"The development of the Internet and information and communication technologies, as well as the expansion and intensive use of mobile and Internet devices, social networks and services, such as instant messaging or geolocalisation, have brought about changes in the ways that people interact with one another and thus changes in the understanding of professional activity, businesses and competitiveness."

In November 2019, the Spanish Data Protection Agency published a series of recommendations or projections to be included in preventive company policies to minimise the risk of conduct constituting harassment in the workplace and to take action against it.

In one way or another, innovation involves greater humanisation, robotic intelligence increasingly represents human movement, the algorithms of artificial intelligence facilitate facial recognition and interaction as if you were talking to a person, to the extent that there are more and more applications that connect to devices that enable interaction between a computer and a brain. This may even change and expand the way humans communicate, and good management of big data allows you to contact fewer people but reach more, termed the “Reverse Phonyl Theory” at Géiser 2019.

In fact, we had the opportunity to look back at the list compiled by Bill Gates in 2019, in which he detailed ten disruptive advances with the potential to transform the world: Robotic dexterity, the new wave of nuclear energy, the prediction of premature births, the capsule that contains an intestinal probe, personalised vaccines against cancer, beef burgers without beef, carbon dioxide traps, wrist electrocardiogram, sewerless toilets and artificial intelligence assistants who speak almost like humans. It must also be borne in mind that older sectors, such as glass and cardboard, are making a strong comeback as innovative sectors bearing environmental and social responsibility.

There is no doubt that everything evolves and affects our lives, as shown by the recent judgement 568/2019 of 29 October of the Supreme Court, First Chamber for Civil Matters, which establishes that the introduction of a third party into the family home, into a stable loving relationship, distorts the nature of the home. It stops being a family home and therefore constitutes a substantial change in circumstances, which justifies the modification of a regulatory agreement signed on the grounds of a divorce.

Likewise, the trade policy of an airline company pertaining to the tariffs applicable to hand luggage has been brought into question as it is considered unfair to consumers. This is based on judgement 373/2019 of 24 October of Commercial Court No. 13 of Madrid, which ordered that an airline company return the additional fee to a passenger who was obliged to pay it for hand luggage.

In the same way, the leadership and magnetism of María Dolores Pelayo was evident at the Golden Teide Awards on 13 December 2019, with the prize recipients being her, the University of La Laguna and the workers of Thomas Cook, with the values that they represent, i.e. liberty, equality, responsibility and solidarity, always with people at the centre.

Just as we should not rely on other people for our own happiness, we should also not put our rights and obligations, whether political or economic, in the hands of others. We therefore need to improve in the area of equality and some solidarity levies that do not discourage the efforts of people, enabling us to be truly independent – we must remember that putting power elsewhere could still mean that it remains in the hands of others.

Finally, the Chamber for Contentious Administrative Proceedings of the Supreme Court, Section I, clearly expressed by Order of 28 October 2019, which dismissed an appeal for reversal, recognising the interpretive and explanatory content of Act 8/2018 of 5 November, that for the purposes of calculating the yield from the sale of tangible property produced in the Canary Islands, banana subsidies will be part of the same, hence their inclusion for the purposes of the allowance. This is great news for the banana sector and agricultural sector in general, which are examples of innovation, sustainability and resilience.