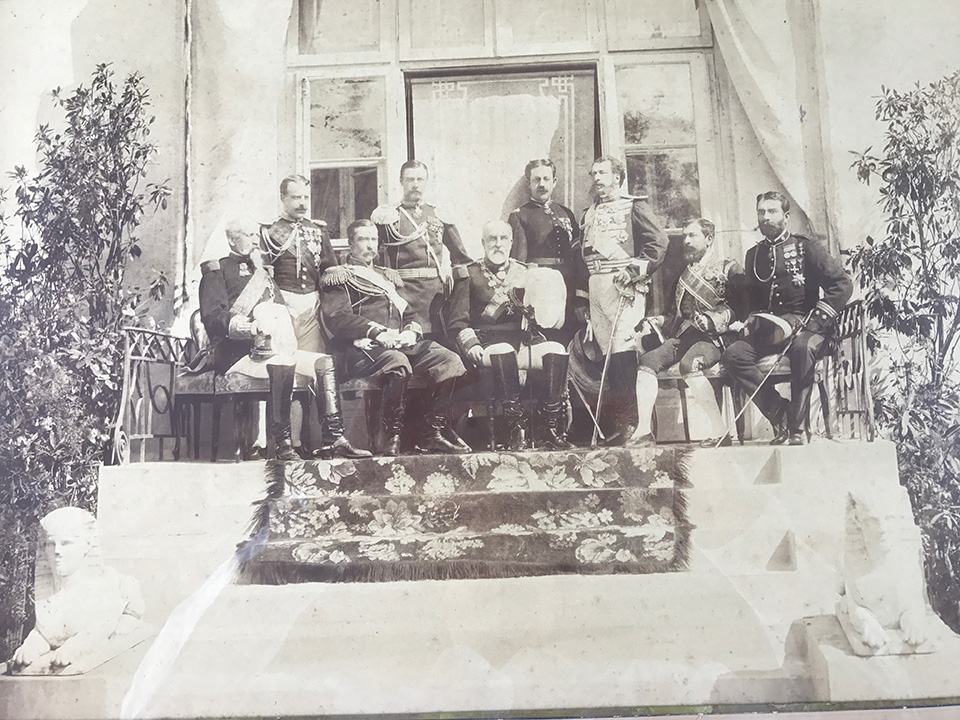 “Treaty” refers to an international agreement concluded in writing between states and governed by international law, whether embodied in a single instrument or two or more related instruments, regardless of their actual designations, as provided for in Article 2 of the Vienna Convention on the Law of Treaties of 23 May 1969, which Spain joined per instrument on 2 May 1972. The following is stipulated in this Convention:

“Considering the key function of treaties in the history of international relations, recognising the growing importance of treaties as a source of international law and as a means to build peaceful cooperation between countries, whatever their constitutional and social systems may be;

Noting that the principles of free consent, good faith and the standard of pacta sunt servanda are universally recognised;

Affirming that disputes arising from treaties, like other international controversies, should be resolved by peaceful means and in conformity with the principles of justice and international law;

Recalling the resolution of the peoples of the United Nations for creating conditions under which justice and respect for obligations arising from the treaties can be maintained;

Bearing in mind the principles of international law embodied in the Charter of the United Nations, such as the principles of equal rights and of free will of peoples, of sovereign equality and independence of all states, of non-interference in the internal affairs of the states, of prohibition of the threat or use of force and of universal respect of human rights and fundamental freedoms for all and the observance of such rights and freedoms.”

One example is the Extradition Convention between the Kingdom of Spain and the Republic of Colombia signed on 23 July 1892, which the amending protocol made ad referendum in Madrid on 16 March 1999 refers to as satisfactory, in which the following is recorded:

“Her Majesty the Queen Regent of Spain, on behalf of her august son Alfonso XIII, and His Excellency the President of the Republic of Colombia, with the aim of fostering the proper administration of justice and preventing their respective countries from providing safe havens for avoiding the repression and punishment of criminals and delinquents, have decided to conclude this Convention and, for this purpose,

Her Majesty the Queen Regent of Spain designated Bernardo J. de Cologan, her minister resident in Colombia, and His Excellency the President of the Republic of Colombia designated Mr Marco Fidel Suárez, Undersecretary of Foreign Relations, in charge of the Office, as their plenipotentiaries.

Who, having communicated their respective full powers and finding them in due and proper form, have agreed upon the following articles”.

Bernardo J. Cólogan, as the Dean of Foreign Ambassadors in Beijing, before Imperial China of the Empress Cixi, led the negotiations and signed on behalf of Spain together with the plenipotentiaries of Germany, Austria-Hungary, Belgium, the United States of America, France, Great Britain, Italy, Japan, the Netherlands, Russia and the representatives of China, His Royal Highness Prince Yikuang and His Excellency Count Li Hongzhang, the Xinchou Treaty or Boxer protocol of 7 September 1901, which took place in the Spanish embassy. This negotiation earned recognition from many countries, including Imperial China which awarded it the Grand Cross of First Class of the Order of the Double Dragon of China (1901) and, according to legend, gave it two lion sculptures made of stone. Hence, their painting can be seen in the Spanish embassy in Beijing today and are known as the “lions of Cólogan” who guard the entrance, although those that currently exist were a gift from the former Minister in Beijing who served between 1924 and 1936, Justo Garrido, as former ambassadors of Spain in China, Eugenio Bregolat y Manuel Valencia, wrote in the foreword to the book of industrial engineer and investigator Carlos Cólogan Soriano: Bernardo Cólogan y los 55 días en Pekín [“Bernardo Cólogan and his 55 days in Beijing”].

He pursued his diplomatic career in destinations spanning four continents and he managed to qualify as a film diplomat, not just on the basis of having experienced the Boxer Rebellion in the film “55 days in Beijing” and composed the score of the Waltz of the Boxers during the siege, which he dedicated to his daughter in memory of the events, as described by the diplomat and writer Luis Valera y Delavat in his book “Sombras chinescas. Recuerdos de un viaje al Celeste Imperio” [“Shadow play. Memories from a trip to China”], but rather on the basis of everything he experienced, such as the political crisis in Mexico with the triumph of the Maderista revolution and the resignation of Porfirio Díaz, the Ten Tragic Days together with US ambassador Henry Lane Wilson and the Constitutional Revolution, having taken part in a duel with pistols in Athens when he was appointed Young Language Officer of the Spanish legation, in Constantinople as secretary of the Spanish legation, which coincided with as the inauguration of the Suez Canal, in Caracas when he experienced the conflict in April 1872 of an armoured frigate with the American vessel called Virginius, and he was also stationed in Tangier, Washington DC, Buenos Aires, the Kingdom of Siam as well as in China. 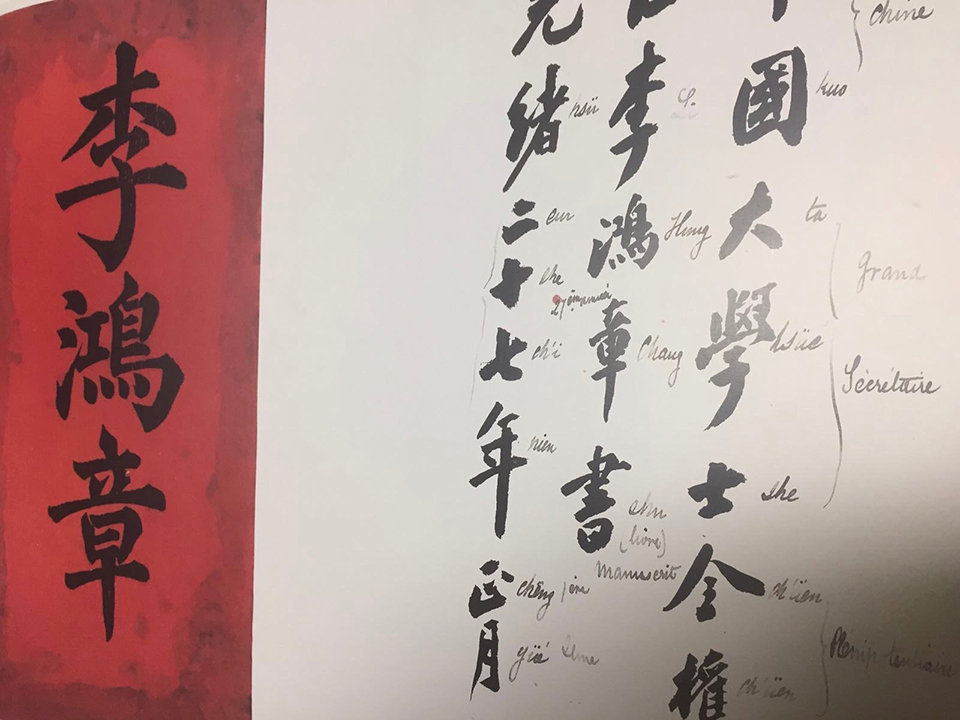 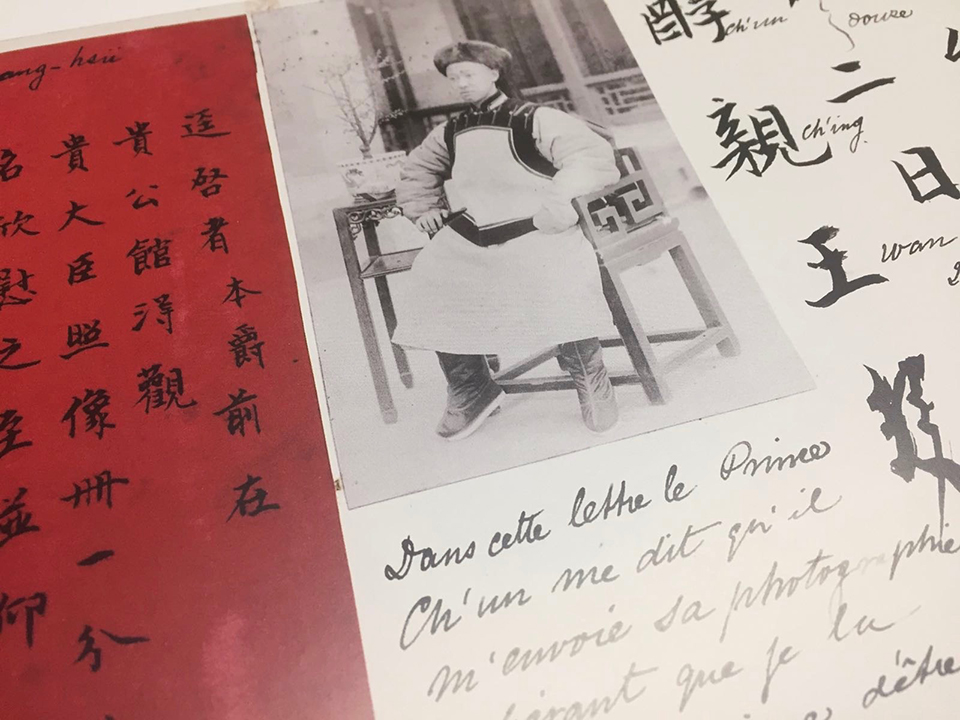 Besides that, his brother Leopoldo who was military attaché in the Spanish legation in Berlin and, according to the newspapers of the era, was extended the offer by the Emperor of Germany and King of Prussia, Guillermo I, to join the Prussian army, formed part of the extraordinary embassy sent to the coronation of Tsar Alexander III of Russia in 1883 by Spain, as evident in the photographic evidence. His brother Juan, as a military civil engineer, was stationed in the Philippines and Tokyo where Emperor Mutsuhito awarded him the Officer Cross of the Order of the Rising Sun (1898), and formed part of the commission that represented the army of Spain at the World Exhibition in Chicago 1893, which the 400th anniversary of the discovery of the New World by Christopher Columbus had as its theme. 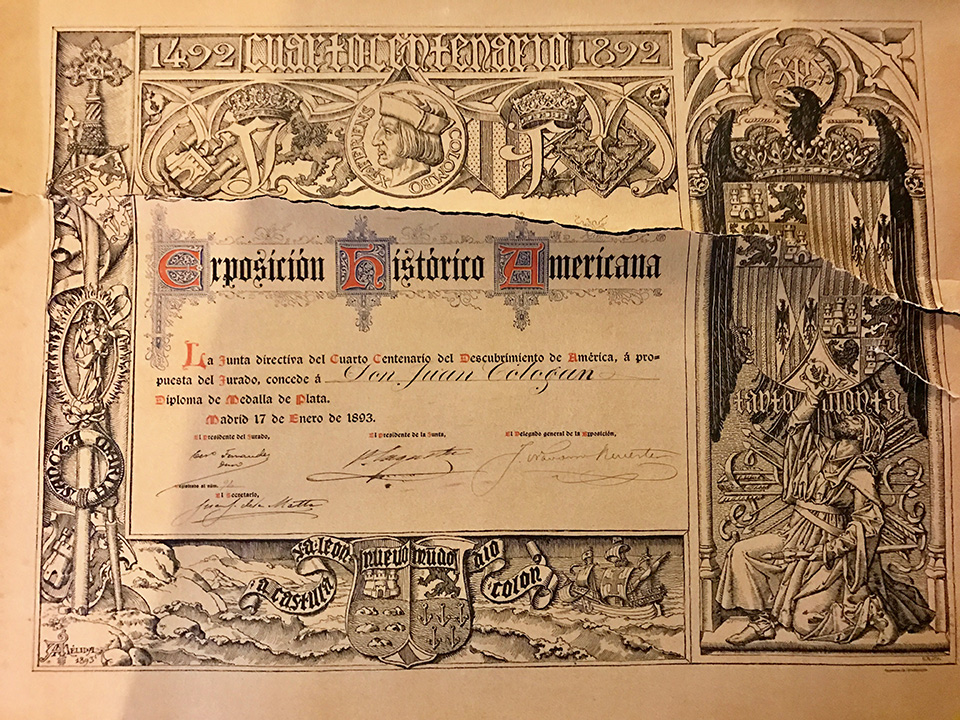